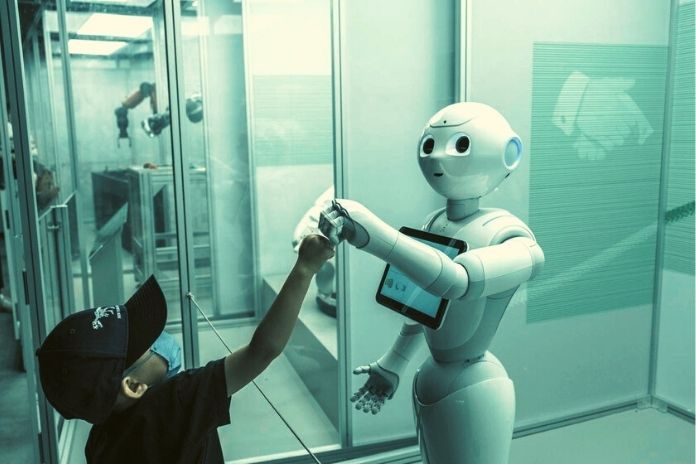 Humanoids that move in the field can easily tip over uneven floors or bump into obstacles. Operators use special vests to stabilize the robots – and even receive tactile feedback. Engineers see several possible uses for robots – from carrying heavy loads in impassable terrain to repairing tasks in dangerous places to rescuing people from crisis areas. The development is making great strides. However, a weak point remains that humanoids are challenging to control and quickly lose balance when walking on two technical legs.

That’s why engineers at the Massachusetts Institute of Technology (MIT), Cambridge, and the University of Illinois at Urbana-Champaign developed a new method. Your robot, which resembles a torso with two legs, is controlled remotely by a human operator. This operator is wearing a high-tech vest. His movements are transmitted directly to the humanoid. Feedback is given at the same time.

Development Of Robots With Teleoperation

In the first step, developers constructed the two-legged robot system Hermes (Highly Efficient Robotic Mechanisms and Electromechanical System) and the minor model system Hermes Little. A special vest with sensors to record the movements of an operator via teleoperation and transmit them to the machine was also developed.

The vest allows an operator to not only direct the robot’s movements. He also feels the forces acting on the machine and throwing it off balance, for example, through unevenness in the floor. If the robot begins to tip over, the operator perceives a similar force through his vest. He moves his body to bring himself – and thus also the robot – back into a stable position.

“It’s like walking with a heavy backpack. You can feel the dynamics of the backpack changing around you, and you can compensate for imbalances properly”. He is researching at MIT as a postdoc. “If you have to open a heavy door now, the human can order the robot to throw his body against the door without losing his balance.”

How Can A Robot Be Stabilized?

Background: For robots to take over the balance of their operator and not just copy movements, the team first had to find a way to map the balance technically. Engineers recognized two essential aspects: the center of mass and pressure. According to Ramos, both variables describe how stable the robot is in a particular situation.

Ramos then recorded movement patterns of human test subjects in the laboratory to record stability limits. His test participants jumped on a floor plate that measures forces. They swayed back and forth to see how human reflexes prevented them from falling over. Ramos then developed a model that shows all parameters concerning one another. This resulted in the control algorithm for Hermes Little, which was transferred to Hermes.

The engineers had Hermes perform tasks under various conditions. Your humanoid could pour a cup of coffee, chop wood, or fight simulated fires with a fire extinguisher. If it was firmly anchored to the ground, it could use strength and remain stable even without software. However, if the robot had to take steps to perform an activity, the risk of falling over without an operator was significantly greater.

In the laboratory, Ramos found out that when he wore the vest, he could control the movements and balance of the robot and feel when the device exerted forces. Ramos felt the vest push into the robot when a hammer hit the robot. It Was deflected in the direction in which the device was moving. He countered it himself – and the machine remained stable.

“We found that copying human movements is not enough to generate high forces or move heavy objects, as robots would fall easily”. This can be avoided by transmitting dynamic responses from a human operator. And Ramos adds: “Since you have a person who demonstrates the movements, the robot learns new activities in no time at all.”