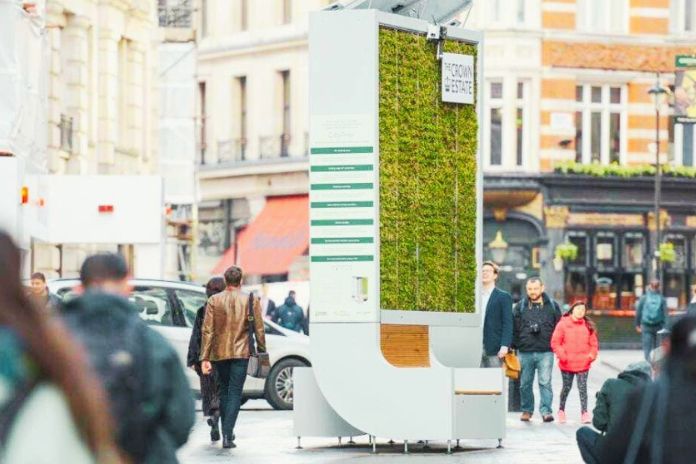 Technology: Dutch architect and designer Bob Hendrik has developed a living street bench to convert CO2 into oxygen. The inflatable plastic structure of the bench contains around 120 liters of algae water.

Technology: Regarding climate change, one plant has particularly great potential: the alga. On the one hand, huge algae tanks should compensate for the future of millions of tons of CO2 in the desert. On the other hand, algae, as a component of buildings, should reduce emissions in the city.

Nevertheless, there are also downsides because the over-fertilization of our habitats represents a danger. City planners nevertheless believe that algae have great potential. In the Netherlands, the architect and designer Bob Hendrix has designed a “living bench.” It should invite you to linger and convert CO2 into oxygen.

The so-called Living Bench consists of biological plastic inflated with water and air. In turn, there are so-called hair algae in the water. Once inflated, the construction includes 120 liters. All components also come from different ponds in the Netherlands.

The street bench made of algae, in turn, converts CO2 into oxygen in two different ways every day. If no visitors are on the bench, a solar-powered pump pumps the ambient air into the water. The algae then eat up the CO2 molecules and produce pure oxygen.

Another pump pumps the air back into the environment on the other side. When people sit on the Living Bench, their movements are sufficient to keep this air flow going.

Up To 200 Liters Of Clean Air Per Minute

The city has to service the bank about twice a month. Then the algae receive new phosphates so that they do not die. The exact impact on the environment is still unclear. Still, Hendrix says that 500 liters of algae water clean around 200 liters of air per minute.

More street benches may be made of algae in other cities in the future to improve air quality. In combination with heat waves, air pollution can become a significant hazard. The algae bank could help here.