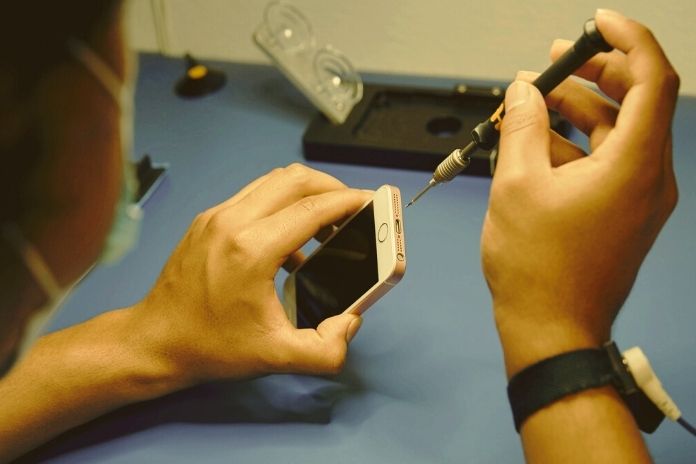 Apple Users: Repair broken iPhone yourself? That’s hardly possible until now. The tools were previously reserved for professional repairers. But now, the group has announced a program for self-service repairs. However, the step is not entirely selfless.

So far, Apple users have only rarely repaired defective devices themselves. Because to repair broken iPhones, MacBook’s and Co., special tools and spare parts are necessary. So far, however, Apple has only made them available to selected repairers and workshops.

But that should change soon because Apple wants to restrict access to its tools and spare parts for less in the future. The company even announced a self-service repair program. Apple users should be able to carry out certain repairs on some devices themselves in the future. It starts with the iPhone 12 and iPhone 13.

Repair Your iPhone: Spare Parts And Tools Directly From Apple

The defect itself was a nuisance with a broken iPhone because Apple users had to go to a certified workshop even for sometimes simple repairs.

This is often associated with considerable costs. So far, users have not even been able to replace a defective battery or a broken display on their own.

Because the special Apple tools and spare parts were previously only available to authorized service providers and selected, independent repair providers.

But that is about to change with the self-service repair program. Because, starting with the iPhone 12 and iPhone 13, Apple users should be able to obtain the essential spare parts directly from Apple.

Replace The Battery, Screen, Etc. On iPhone 12 And 13 Yourself

These include batteries, screens and camera modules. But in addition to spare parts, the company also wants to provide access to its unique tools.

A new online store will in the future offer over 200 individual parts and tools so that users can carry out the most common repairs on their own.

Apple’s self-service repair is slated to start in the US in early 2022. The offer is to be expanded to other countries in the coming year.

However, an exact date for Europe has not yet been set. According to its statements, Apple intends to expand the program to Mac computers with an M1 chip over time.

With this step, Apple responds to the wishes of numerous customers and the demands of consumer advocates. But the new service is not entirely selfless. This is because politicians have had antitrust reservations for some time.

Some US states – including Apple’s home state California – have since demanded a right to repairs. The European Parliament has already spoken out in favor of such an approach. Above all, to prevent the increase in electronic waste and extend smartphones’ useful life.

Only Something For Tech-Savvy People?

Binding rules have been in effect in the European Union since March 2021, which oblige technology providers to provide spare parts so that devices can be repaired with conventional tools. However, so far, this only applies to products such as refrigerators, washing machines and televisions – not to smartphones.

With its self-service repair program, Apple anticipates such an impending regulation. However, the group limits the fact that the service is primarily aimed at technology-savvy people. For the vast majority, the company still recommends visiting a certified workshop.

ALSO READ: Why Are We Afraid That Others Will Know Our IP Address?