HomeTECHNOLOGYAI In Production: It Offers These Benefits
TECHNOLOGY

AI In Production: It Offers These Benefits 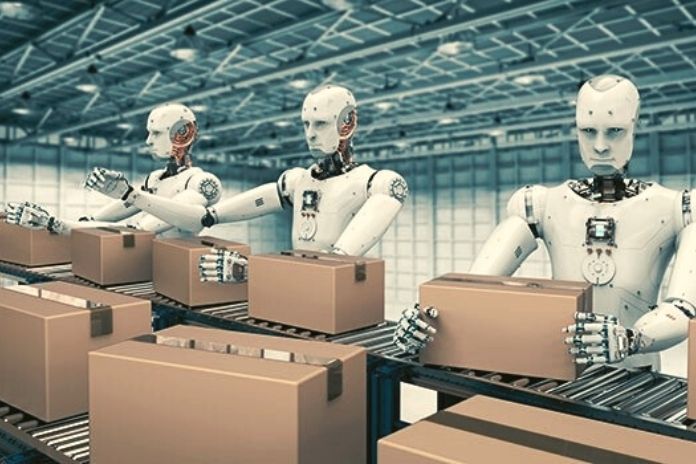 In the future, AI in production could identify the potential for optimization, make fitters’ work easier, or help with quality assurance. A team of scientists from the two Fraunhofer institutes IPA and IAO, has set up a series of demonstrators in the Future Work Lab that show how AI can help people in production familiarize themselves with new tasks quickly and process complex information and correct errors.

AI In Production: The Third Eye Helps With A Visual Inspection

The visual inspection of components is considered to be time-consuming and costly. This could increase the performance of test workstations with AI. Robot and Assistance Systems department and Tobias Stahl from the Corporate Strategy and Development department at Fraunhofer IPA have programmed “ThirdAI,” an artificial neural network that can independently differentiate between good and defective components. All you need is a laptop to which one or more USB cameras are connected. The visual inspection tool is ready to use after two days of training at the latest.

The development of an AI application before it is used in quality assurance is illustrated by four demonstrators grouped under “Data Science Track.” The first stage is the “data preprocessing” demonstrator. It contains a basic data set of photos of steel plates and process data. Some photos show defects such as dents or scratches. The task of the AI ​​application should be to categorize these defects to optimize the production process. The user of the demonstrator now combines different data sets, corrects missing data points, and eliminates outliers in the data. In the end, there is a data set that a machine learning algorithm (ML algorithm) can evaluate.

The user can find out which algorithms are suitable at the demonstrator “How ML methods work.” It imparts knowledge about neural networks, decision trees, and various algorithms, including advantages and disadvantages. The algorithms can be tested on the “Data Preparation & Algorithm Selection” demonstrator. With playful elements, an AI application can be tested with the prepared data set and the previously known ML algorithms. The user tries to build the best-functioning AI application and can compete with others in the process.

When the finished AI application is then used, it often arises how it classified a defect in a steel plate. Because in a neural network, only the input and output layers can be viewed properly. However, what is happening within the network is usually not apparent. The fourth and final demonstrator of the Data Science Track is dedicated to this black box and tries to make the decisions of the neural network understandable for people. For this purpose, a decision tree is trained that maps the neural network and possibility. Both now make the same decisions.

With “Lean Data Acquisition” (LeanDA), researchers from the Factory Planning and Production Management department at Fraunhofer IPA have developed a sensor system that records and evaluates data in manual assembly processes. To analyze manual processes in production, the sensor system is attached to components, assemblies, workpieces, tools, and devices. It sends the collected data wirelessly to an edge device, evaluated using a machine learning process.

This intelligent evaluation combines the data from the sensors and derives assembly processes from it. For example, the AI ​​algorithm concludes from the movement of a component and the simultaneous use of a cordless screwdriver that the component is being screwed on. The linked movement of parts indicates that they form an assembly.

The data analysis shows which processes were carried out when, for how long, and in which order. Especially in assemblies with complex products, many variants, and large assembly costs, this creates transparency, updates the planning data, and reveals waste.

The Trinity Of The Future Work Lab

These and many other demonstrators for the work of the future can be seen in the Future Work Lab in Stuttgart. The innovation laboratory for work, people, and technology is divided into three areas:

ALSO READ: Digitization: How Companies Get Around The Hurdles With Right Strategy