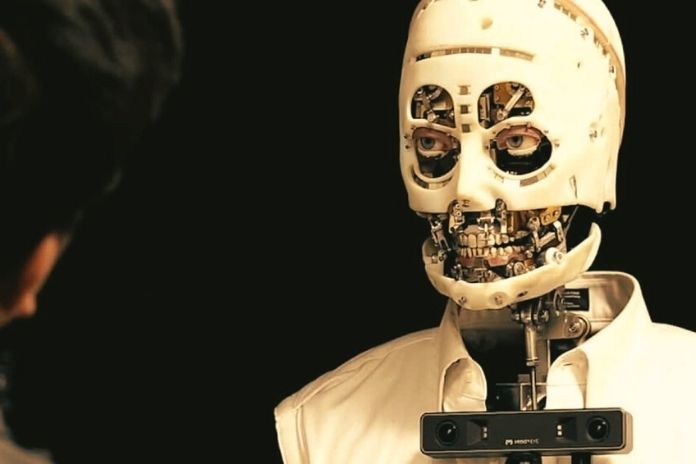 Disney Robot: In combination with artificial intelligence, humanoid robots are already achieving outstanding results today. Even so, the personal interaction is mostly mediocre. A Disney robot is about to change that. It’s creepy and, at the same time, very authentic.

Admittedly, the Disney robot doesn’t exactly remind us of relaxed music and long movie nights in our childhood, but instead of a deadly, merciless robot that was only created to exterminate humanity. On the one hand, unlike many technical colleagues, this is because the Disney robot behaves very humanly. However, we will go into this in more detail later in the text.

On the other hand, that is probably the main reason for this creepy first impression – the robot has no skin. Only the eyelids and gums are reminiscent of a person. The rest of the corpus lacks the “soft” human factor.

The nameless Disney robot resulted from a collaboration between several members of the media company’s research department and a researcher, each from the California Institute of Technology and the University of Illinois.

The scientific work is called “Realistic and Interactive Robot Gaze” and deals with how humanoid robots can appear even more human. Ultimately, the project reveals the biggest problem of all human-like robots: facial expressions and gestures.

Because many well-known robots can recognize your eyes, therefore, on a technical level, they can keep eye contact with people. In human-machine communication, however, people immediately perceive the technical stare as artificial. Because: Regardless of what happens around us: The robot rigidly maintains eye contact – and that is not human.

Nonverbal Communication Is Much More Important

This is precisely where the developed Disney robot comes in. The researchers addressed the essential part of human interaction: non-verbal communication. Contrary to popular opinion in society, it accounts for 80 percent of all signals in interpersonal communication. This means that facial expressions and gestures play a significantly more significant role for us humans than, for example, the words we hear.

Therefore, continuous zoom calls and video meetings also cause physical exhaustion among employees. The human brain cannot see a large part of the known and essential behavior because it is outside of the field of view.

What does this mean for the Disney robot? In summary, it can be said that the development of the research community does not keep its gaze fixed but also simulates human interaction through head movements.

A chest sensor that controls the movements of the head is responsible for this. This mimics natural behavior because we keep moving our heads in conversations even when we don’t want to communicate. This could be, for example, a subconscious nod or the result of the chest rising and falling due to our breathing. As a result, our body constantly makes corrections to maintain eye contact.

But there is a second exciting component of the blinking robot: it tracks the other person’s eyes and reacts to external stimuli and events. What does that mean in concrete terms? For example, if the person talking to the Disney robot turns to a second person and talks to them or turns around because of loud noise, the Disney robot does not maintain eye contact. He also pays attention to external events.

Humans Can Be Distracted, Robots Not (Yet)

And that is precisely the decisive factor for human communication. If our technical counterpart does not react physically to external events but stubbornly follows the technical specifications, this does not create a feeling of humanity.

The constant movements of the eyes and the head and the blinking and the simulated reaction of the head to human breathing and the response to external events create an image of human behavior in our brain. And that is precisely the goal of all humanoid robots, after all.

ALSO READ: These Are The Most Significant Cyber Threats In 2021